I have witnessed first hand the very positive relationship between drugs and wine in Italy.

Italy is home to a truly unique approach to drug addiction; it’s called San Patrignano located in the Romagna section of Italy’s East Coast within sight of the Adriatic. Founded in 1978 by Vincenzo Muccioli, it is completely free to anyone accepted in the program. But they only accept people whose addiction has brought them to the nadir of despair and who are ready to commit to a 4 year intensive bootcamp. Once an addict agrees to enter San Patrignano, they are not allowed to leave. They must commit totally to the program which involves selecting a trade and enrolling in an internship.

Among the trades offered are cooking, metal work, woodwork, farming and….wine production. In fact San Patrigano artifacts are highly regarded, especially their wines which have received numerous Tre Bicchieri awards, most recently their Avi Riserva 2008, based on the Sangiovese di Romagna. The 110 hectares of estate vineyards produce some 500,000 bottles and are sometimes referred to as a miniature Bolgheri on the Adriatic.

A recent headline in the NY Times was “Ex-Addicts Find Way and Head to Marathon.” It was referring to 6 runners from the San Patrignano drug rehab 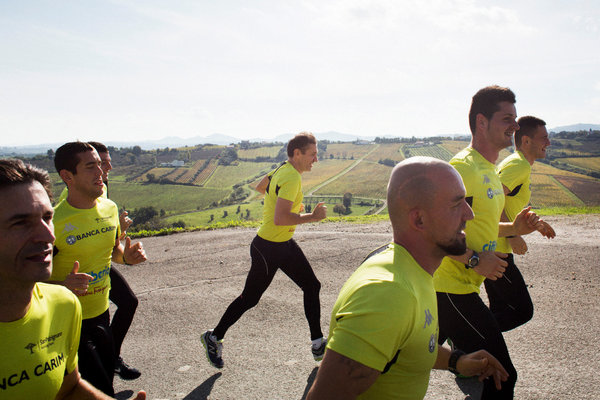 center who were preparing to run in the NY Marathon. They were part of the community of 1,300 residents who cultivate their own food, clean their own rooms and commit to a trade.

Visitors are allowed and my wife and I recently had the opportunity to experience first-hand life at San Patrigano. We toured the facilities, had lunch with wine with 1,300 others, (the residents never have wine with their meals) and had a private wine tasting with the head wine-maker.

Lunch for 1300 at San Patrignano

The administration of San Patrignano hopes that the exposure that comes with the runners in New York will make “our community known and available to other people in need all over the world, according to Letizia Moratti, president of its US affiliate, Friends of San Patrigano.

For more information on San Patrigano, please consult their webpage.

German Diary: We End with a Winner (Win-Win)

German Diary: We End with a Winner (Win-Win)