My Smelly Friend Roquefort, How Do I Pair Thee?

I love cheese, as is befitting a person with an Italian background. I love cheese so much that I can almost personify the different types and many of them you really have to love to overcome some serious obstacles. Roquefort is one such friend.

I have become an aficionado of the blue cheese family: Gorgonzola, Stilton and Roquefort are my three best friends. But the one that stands above the others is my French friend.  In fact I had to make a pilgrimage to visit in situ where my friend is born.

If you ever get to Southern France, Montpellier in particular, you are about 90 minutes away from the Roquefort caves. As the crow flies, it would be a lot shorter but for the winding hilly roads. I suggest a stop at the Crusader village of Couvertoirade where the entire town is a museum from the time of the Crusades. And then you’re ready to step back in time to the Roquefort cheese caves.

You have to put on a plastic overcoat and the silly plastic bonnet to enter the caves. They should also provide a clothespin but they don’t so try to breathe through your mouth. As you descend, you pass by racks and racks of huge rounds of bread that they allow to get green from mold. (If you easily gross out, then the tour might not be advisable.) This mold is what is added to the cheese to give it its distinctive flavor, and its pungent aroma.

Then you enter the endless rooms where the  rounds of Roquefort age. They need just the proper amount of humidity so that the mold can proliferate and it’s all 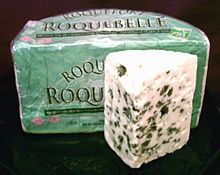 controlled by Nature. If ventilation is needed, fissures in the caves allow air to enter and close when there’s enough. Please don’t ask how this happens because I still don’t understand it myself.

According to the legend, a long time ago a young shepherd used the caves as a shelter while watching his flock. One day he saw a beautiful girl and started flirting with her, so much so that he forgot his lunch of bread and cheese in the cave.Months later he came across his forgotten sandwich which because of the damp environment had turned it bluish green with mold. Because he was really hungry, he reluctantly started to eat it and to his astonishment found it incredibly delicious.

Unfortunately I won’t be able to visit my friend this October when we bring a group to Provence and the Rhone Valley, although we’ll be pretty close so I will have to rely on memories.

What wine do I serve with my friend? Personally I like to enjoy my friend without any distractions, but if I do have wine, it tends to be either a sweet wine, such as a sauternes. Or if I gotta have a red, I do what the French do: select a wine from the area. Roquefort is produced in the Languedoc so a medium bodied red redolent of that ubiquitous garrigue fills the bill. A red with some substance from the Languedoc-Roussillon area will do such as a Faugères or a wine with the designations Pays d’Herault. We’ll be in Bandol and a superb example would be Domaine Tempier where the star grape is the monastrell.

A well made Roquefort has a sublime smooth buttery texture juxtaposed with the gritty crystals of mold. They are creamy and slightly sweet when you first bite into it and then the spice and salt explode in your mouth.

The two top producers are Société and Papillon and you should find them in most supermarkets. For smaller producers, you will have to go to a cheese specialist and if there isn’t one nearby, you can go on line to Murray’s of New York. 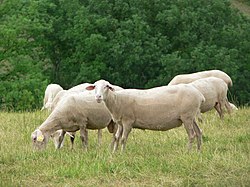 Roquefort is made from the milk of the Lacaune sheep